If you enjoy gritty, fast-paced crime, you can’t go far wrong with Dan Reno (pronounced Renault). He’s tough, he’s clever, he’s witty, and he always gets his man. No, he’s not a Mountie, he’s a private detective working out of Lake Tahoe, on the border of Nevada and California. It’s a stunning backdrop to the tale, but more of that later.

In this episode, which takes place in the depths of a snowy midwinter, Dan Reno is hunting the killer of two beautiful blonde women. He has a personal interest in the case as he finds one of the bodies naked and abandoned in a snowdrift while he’s out skiing.

During the investigation, Dan also runs foul of two rival motorcycle gangs. What he doesn’t know is whether the cases are linked. As well as the murders and the biker gangs, there is a drugs connection, seedy nightclubs, and an allegedly dirty cop who might be at the centre of it all.

Stanton’s writing is crisp, clean, and first rate. The cases are interesting and tough to crack, there’s a real police procedural, sifting through the clues, feel to Dan’s investigations. But above everything is the landscape. Superbly realised by a writer of great skill, it forms a wonderful backdrop to the action, and becomes a major character in the novel.

The human characters are well drawn, especially Dan and his best mate, Cody, and there’s a love interest, too. And to prove he’s note a complete Neanderthal, Dan has a new addition to his household in the shape of a fluffy kitten—although he still calls his significant other, ‘Doll’ in a throwback to the noir 1950s gumshoes, Sam Spade and Philip Marlow.

If you like action, criminal investigation, and a noir style, you’ll love this novel as much as I did. In fact, what’s not to like? I whistled through this book in a couple of days.

Thoughts on the cover art: A bit misleading—there’s no rope climbing scene in the book—could use a rethink. 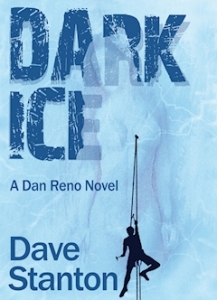 Two murdered girls, and no motive…

While skiing deep in Lake Tahoe’s backcountry, private detective Dan Reno finds the first naked body, buried under fresh snow. Reno’s contacted by the grieving father, who wants to know who murdered his daughter, and why? And how could the body end up in such a remote, mountainous location? The questions become murkier when a second body is found. Is there a serial killer stalking promiscuous young women in South Lake Tahoe? Or are the murders linked to a different criminal agenda?

Searching for answers, Reno is accosted by a gang of racist bikers with a score to settle. He also must deal with his pal, Cody Gibbons, who the police consider a suspect. The clues lead to the owner of a strip club and a womanizing police captain, but is either the killer?

The bikers up the ante, but are unaware that Cody Gibbons has Reno’s back at any cost. Meanwhile, the police won’t tolerate Reno’s continued involvement in the case. But Reno knows he’s getting close. And the most critical clue comes from the last person he’d suspect…