Home/Reads, Reviews/Book Review ~ Near Miss by Jeff Shear
Previous Next

Solid writing let down by an over-complicated, episodic plot…

I was torn between giving this book three or four stars and ended up with a vacillating 3.5. But in the end, I rounded up to 4 because of the innate mathematician in me and the quality of the writing.

This is a well written, at times interesting, but ultimately rambling, episodic story that turned out to be a little too ‘clever’ for its own good. But that’s fine, I tend to like complicated stories. My main problem is I didn’t really ‘get’ or ‘like’ the hero, Jackson Guild-pronounced Wild (really?). The guy stumbles (or is led) from one unmitigated disaster to another in almost total ignorance of what the heck’s going on. He has a few nice one-liners which the author sprinkled throughout the novel, and the dialogue is at times great, but ultimately I didn’t really care what happened to the hard-drinking press hack–who didn’t do much in the way of reporting. He just ends up getting shot at and actually shot (nicely handled gory scene that, by the way).

Not really sure what the author was aiming for here with Guild (Bond, Bourne, or Quiller), but Le Carre would have probably done it better.

The title’s a bit of a misnomer, too. We learn from the outset that Washington DC was destroyed by a nuclear bomb a month or so before the story opens (which is a great place to start the novel and could have made it a real Gothic horror piece). Basically, what I’m saying is, there’s no ‘near miss’ about it.

There’s a new Cold War vibe going on through the novel with an octogenarian George Smiley type character pulling the strings. We also have sub-plots involving:
Another nuke, but this one’s HUGE!
The search for DNA needed to break a cipher
Hard-drinking, hard-shooting Russians (including a coquettish femme fatale who’s role is to (deleted to avoid spoilers)
A load of good (or are they bad) guys called Tom
A megalomaniac General with a plan to destroy Mecca
Murders galore, and
Other stuff (see what I mean about a load going on?)

Will I be rushing to buy the next in the series? Not sure. Probably not.

Thoughts on cover art: Unfortunately, similar to the work itself, could do with a professional recover. 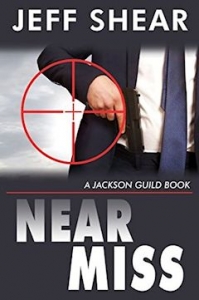 Terrorists nuke Washington, and investigator Jackson Guild discovers there’s evidence of Moscow’s involvement encoded along a strand of DNA, which he’s captured. Guild’s no spy and espionage is no game. He prefers Irish whiskey. Guild’s got PTSD and he makes mistakes. Things go south. He’s kidnapped, shot in the face, and held hostage by Russians who have no idea that Guild is the one man who can stop the clock ticking down to nuclear war.