Don’t miss this special deal! The first box set in my hard-hitting, action-packed Ryan Kaine’s 83 action thriller series, The Ryan Kaine’s 83 Series: Books 1-3, is available TODAY for just 99c! Just in time for this deal, I’ve also updated the cover – let me know what you think! 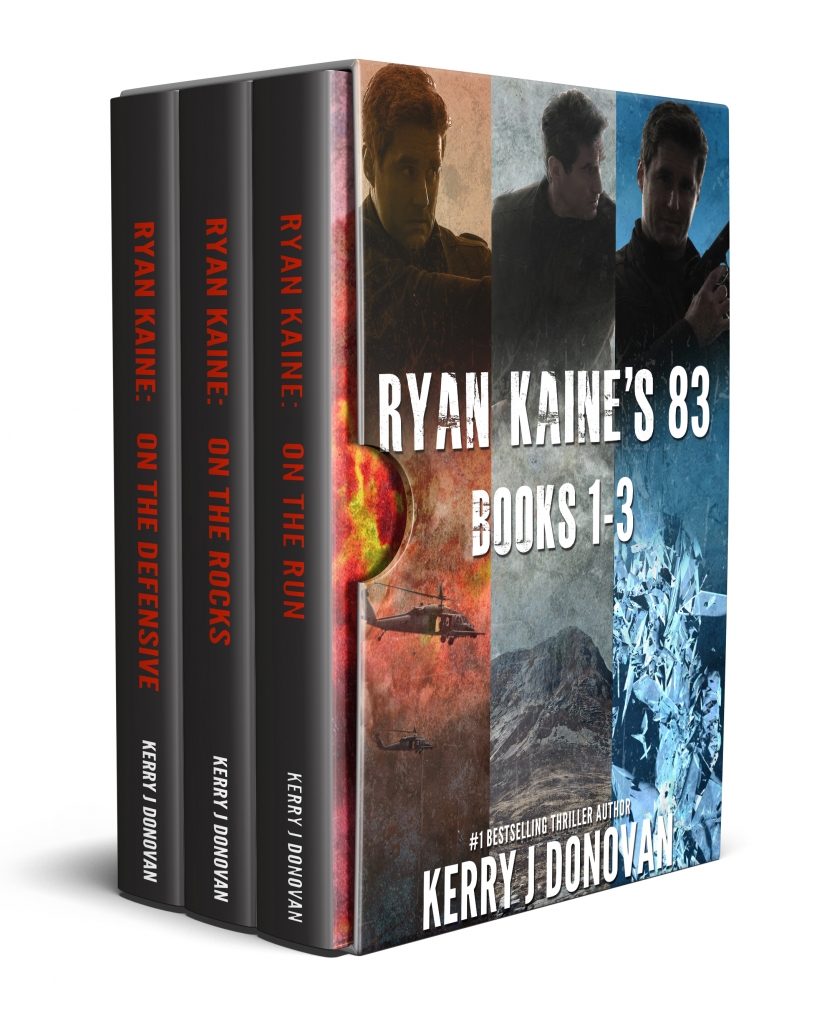 Here’s what you’re getting for such a great price:

When an apparently routine operation ends in tragedy, decorated former Royal Marine, Ryan Kaine, becomes the target of a nationwide manhunt. The police want him on terrorism charges. A sinister organisation wants him dead.

Desperate to prove his innocence, Kaine is forced to rely on two women he barely knows: one, a country vet who treats his wounds; the other an IT expert with a secret of her own.

Battling overwhelming guilt, life-threatening injuries, and his strong moral code, Kaine hunts for the people who turned him into a mass-murderer.

Using his combat skills, instincts, and new-found allies to lead him to the truth and redemption, Ryan Kaine is … On the Run.

Book 2: On the Rocks

A schoolboy lies alone and dying on a Scottish mountainside. A highly experienced rescue team can’t find him. One man is the boy’s only hope.

When news of Martin Princeton’s disappearance reaches international fugitive and former Royal Marine, Ryan Kaine, he abandons the evidence that could help clear his name and heads to the Scottish Highlands. Officially, the authorities want Kaine in custody. Unofficially, there’s a bounty on his head.

Still hampered by injuries from the events that turned him into the most wanted man in Europe, Kaine uses the heavy burden of killing eighty-three people aboard civilian aircraft Flight BE1555 to fuel his new mission. He will protect the grieving families, The 83, at all costs.

Armed only with charm and an intimate knowledge of the region, Kaine must convince the rescue team of his good intentions and find out everything he can about Martin’s disappearance before they discover who Kaine really is.

Using his mountaineering knowledge, his special forces training, and his rapport with the locals to help him find the missing boy in time, Ryan Kaine is … On the Rocks.

Book 3: On the Defensive

A hard-working family is threatened. Two vicious killers and their ruthless boss are to blame. One man stands between them.

When unscrupulous men try to force Greek restaurateurs, the Constantines, out of their business and their home, they stand firm. Until the head of the family, Orestes, is attacked and left fighting for his life. Their neighbours are running scared. The police are turning a blind eye.

Former Royal Marine and international fugitive, Ryan Kaine, receives a mysterious text with an address and the terse message: “Help them”. With one of The 83—the families of the people who died aboard Flight BE1555—in trouble, Kaine flies straight back into the heart of danger, without a second thought.

Trying to avoid the attention of the thousands of facial recognition cameras installed in London, Kaine finds himself waist deep in a mesh of treachery, lies, and deception, caught in a fight to the death that he cannot afford to lose.

Using his years of covert field experience, intelligence provided by a secretive hacker, and a loyal team of his former colleagues to trace the threats back to their source, Ryan Kaine is … On the Defensive.

As always, if you’d like to drop me a line, I’d love to hear from you, and please consider leaving a review on this or any of my other books. Just a couple of words will do.