It’s a wonderful early spring day here in Chez Donovan. The daffodils are in bud, the days are lengthening, and I’m in the sunroom with an author friend and fellow-scientist (okay, I’m a former scientist, but who’s to know?), Aurora Springer.

Morning Aurora, thanks for dropping by. How are you this fine afternoon?

AS: Fine? Fine? I’m from Atlanta, Georgia. It’s freezing in here. Let me shunt up closer to the fire and warm my hands around this coffee mug. Ah yes, that’s better. Thanks. Now, where were we?

KJD: And here was me thinking you Southern Belles were tough?

AS: Careful what you say when this gal’s got a handful of scalding coffee, boy. [Laughs.]

Talking of Atlanta, what is the best thing about the place?

AS: I live in the suburbs and my neighbourhood is convenient for walking the dog. What’s more, the Appalachians are about two hours north of our house.

KJD: That sounds great. The nearest mountains to us are the Pyrenees, over ten hours south of here. Now, let’s begin this little skirmish with a general question, what’s the most exciting thing you’ve ever done?

AS: Can’t really narrow it down to one, so let me see. Have kids? Break my shoulder falling off a jet-ski? Bare my inner thoughts in my novels? Not much.

KJD: I can relate to two of those. Never been on a jet-ski, but will add it to my bucket list. The broken shoulder sounds painful, and I do know what that feels like. So far, I’ve fractured four bones in my lifetime. It’s a wonder I can still walk upright without a stick.

What do you do to relax when you aren’t working, writing, or falling off jet-skis?

AS: Sometimes I read books by other authors. I take the dog for walks, and in the warmer months, I enjoy canoeing around the lake by our rural retreat.

KJD: Apart from the dog-walking thing, I love the sound of that. As my regular readers will know, I’m not a pet owner, me.

Moving on to the writing part of this interview, like me, you’re a scientist, how does science inform or influence your writing?

AS: That’s a great question. Some of my characters are scientists, or else they share a scientist’s curiosity. In my science fiction stories set on other planets, I try to describe physically realistic landscapes and diverse life forms. Also, I can introduce pseudoscientific explanations for things like teleportation.

KJD: Excellent, I love pseudo-science and resorted to it a little in my fantasy thriller, The Transition of Johnny Swift.

[Hell, we’re not going down that ‘let’s plug my books’ route again are we? Ed.]

Sorry boss, back to the chat. If there were a single thing you’d like to change about yourself, what would it be?

AS: I’d like to grow wings and fly! Or possibly fly without the aid of wings.

KJD: That would be fantastic, a bit like teleportation, eh? I can see a bit of a trend here. You are a dreamer, right?

AS: Exactly. Aren’t all writers of fiction?

KJD:  Can’t argue with that. So, what’s the best advice you can offer to a fellow author?

AS: Editing and polishing your creation is critical and takes longer than you think.

KJD: Amen to that, my friend. Do you have any favourite anecdotes related to your writing?

AS: Published in 2014, my first full-length novel was written some thirty years ago when I was a researcher at Yale University. In the story, I have aliens eating lunch with human scientists in a fictitious version of the cafeteria on the Kline Biology Tower.

KJD: Ha, brilliant, love it. Nothing written is ever wasted. You can always edit, update, and improve.

What is the first thing you do when starting a new novel? Do you research and write a detailed plot outline, or do you go with the flow?

AS: I don’t plot too much in advance, I just write as the story dictates. I fill in with research as necessary, luckily my husband knows a lot about firearms. After the initial draft, I generally list the chapters/events, and sometimes switch the order of scenes.

KJD: That sounds pretty much the way I work, too. What excites you about writing and the writing process?

AS: I love exercising my imagination, creating believable characters and extraordinary worlds.

KJD: Agreed. It’s great being able to do what you like in your head without the men (and women) in white coats coming to take you way, isn’t it?

[Tumbleweeds blow across the sun-room …]

Okay. Now, what can you tell me about your latest project? If possible, I’d love a sneak preview.

AS: So glad you asked that. Some people accuse me of a campy, comic book style, so here it is—a superhero story about a teenage girl who juggles university classes with fighting villains and grumbles about her mother’s rules.

AS: As you insist. The story has a hunky hero, aliens, animals, mystery, and fantastic fights. Who could ask for more? The eBook was published at the end of February. Here’s a brief excerpt:

Inspector Parkins crouched on one knee to examine the corpse. Her skin was flaccid and dry. Blood had gushed from her neck, leaving red streaks on her pink shirt. He did not bother to touch the body. The skin temperature would hold no clues in the sultry heat of the Atalanta summer. Parkins grimaced. The irregular gash across her throat was horribly familiar.

Glancing at the officer, he noted the name on his badge. “Look at her neck, Trooper Cagle. Seen anything like it before?”

With a grunt to acknowledge the Inspector’s request, Cagle leaned over the body and frowned. “It’s strange, now you mention it. I didn’t notice at first. The cut appears to have been made by a weapon with a serrated edge. I’ve never seen a knife with serrations that big.” He stared at the Inspector in alarm and whispered, “What is it?”

“Wish I knew.” Standing up, the Inspector made a fast decision, warning, “Keep an eye on the streets. I’ll file a request for more troopers on night patrol. This death is the second case I’ve seen in the last three weeks with the same type of injury on the neck.” He glowered at the startled officer. “We may be looking for a serial killer.”

“A serial killer,” Cagle repeated slowly. He shook his head and murmured, “With that weird slash, it may be time to call in the Secret Supers.”

The trooper tilted his head and asked, “How long have you been in the city, Inspector?”

“Six weeks on Monday,” Parkins replied, running his fingers through his thinning hair. His thoughts were elsewhere. He stepped aside and beckoned to the ambulance crew waiting with a stretcher. “Take her to the morgue. I’m ordering an autopsy.”

Suppressing a shudder, Inspector Parkins guessed what the medical examiner would find. A body drained of blood like the first murder case. Not a normal killer. He could imagine the careful wording of the official police reports for public consumption. Maybe they did need the Secret Supers. Whoever, or whatever, they were.

KJD: Thanks for that. Love the murder mystery element. As you know, I usually write police proced—.

Damn, can’t get away with anything these days.

So, what’s next in your writing life?

AS: Several things. I have a good start on the next books in my new superhero series. Also, I have ideas for a “near future” story set in our solar system, and a “distant future” intergalactic adventure.

KJD: That sounds wonderful. But, I’m afraid tempus fugit and we have to end our discussion. Thanks millions for your time.

AS: And thanks for your excellent hospitality, now that I’m finally warm again.

KJD: Before you go, as a scientist, can you help me work out the flaws in my teleportation system? Why is it that whenever I dial in ‘Paris’, I end up in Texas? 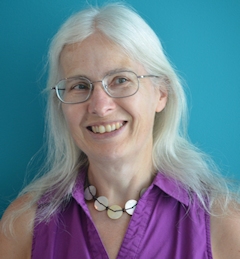 Aurora Springer is a scientist morphing into a novelist. She has a PhD in molecular biophysics and discovers science facts in her day job. She has invented adventures in weird worlds for as long as she can remember. In 2014, Aurora achieved her life-long ambition to publish her stories. Her works are character-driven romances set in weird worlds described with a sprinkle of humor. Some of the stories were composed thirty years ago. She was born in the UK and lives in Atlanta with her husband, a dog and two cats to sit on the keyboard. Her hobbies, besides reading and writing, include outdoor activities like gardening, watching wildlife, hiking and canoeing. 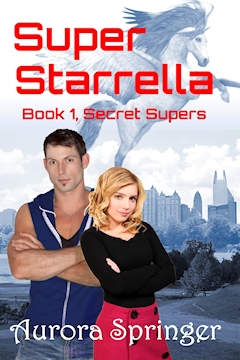 Teen superhero, Starrella, and the flying horse, Rockette, challenge the vicious villains in the skies of Atalanta.

A quiet summer at her uncle’s farm turns frighteningly weird for seventeen-year old Estelle Wright after she trespasses onto an Army base. Blown into the air and knocked unconscious, she wakes with a nascent superpower. Not to mention a winged horse with a snarky attitude and a mind of her own.

Back home in Atalanta, a serial killer is targeting the students at Goldman University. Before long she must juggle college classes with sneaking out of the house after dark to battle vicious monsters. Estelle’s life is in danger, but who can she trust with her secret: handsome Captain Copper from military intelligence, or hunky Toby, the tough gangster with a motorbike?

Young adult superheroes, quirky animal sidekicks, and a dash of romance enliven this thrilling adventure. Book 1 of the Secret Supers.

Thanks again for joining me for another interview. Are you an author? If you would like to take part in one of my FFI’s, drop me a line.