Great story, great ending, and some wonderful wit, especially in the dialogue early on. No point telling you any of the story as the blurb covers that rather nicely.

Only two things prevent me giving this the full 5-stars. First, the author’s penchant for filling whole paragraphs with a list. So long were they at times, I skipped to the end of the list and moved along. Second thing was the authors necessity to repeat scenes we’ve just witnessed. I cite one example (this happens early on, so it shouldn’t be a spoiler):

Our hero (the wonderfully named Rip Lane) picks up a hitchhiker, takes her to the local bus station where a number of things happen–she is watched by two stiffs in Armani suits–she puts her bag in a locker–gives Rip a locker key for safe keeping while she goes to the toilet–then she disappears–the Armani suits switch their attention to Rip and the scene carries on for a little longer.

Later that day, something happens to make the hero want to find the hitchhiker. He returns to the bus station and watches the surveillance pics of the same scene. And here’s the point: The author describes the same blooming scene, almost verbatim, but adds a couple of facts that he didn’t know before–the hitchhiker handed him a different key to the one she used to hide her bag, and skips out the toilet window.

In my opinion (for what it’s worth), one of those scenes should have been severely edited–probably the first. This happens a couple of times in the novel–unnecessary repetition, I mean. It didn’t ruin my enjoyment of the novel too much, but it was rather annoying.

Basically, what I’m saying is if the editor had addressed these minor shortcomings, this book would have been an absolute belter.

Would I recommend this book to other crime lovers? Definitely.
Will I read more for WJ Costello? Absolutely.

Thoughts on cover art: Excellent for a book in this genre. 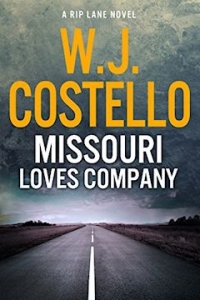 Former U.S. marshal Rip Lane lives in a motor home. He is a drifter. His only desire is to explore the country he once protected. But trouble seems to find him in every small town and every big city along the way. In Missouri he picks up a beautiful hitchhiker with a duffel full of secrets. When the woman disappears at a bus station Rip finds himself the target of mobsters. But targeting Rip is always a mistake. Because he never backs down. And he always exacts his own brand of revenge.