Book Review ~ An Englishman’s Guide to Infidelity by Stuart Campbell

Home/Reads, Reviews/Book Review ~ An Englishman’s Guide to Infidelity by Stuart Campbell
Previous Next

Book Review ~ An Englishman’s Guide to Infidelity by Stuart Campbell

An Englishman’s Guide to Infidelity

I won’t repeat the blurb (see below), nor will I give away any spoilers (as usual), but this is a beautifully crafted, off-key story of murder, mystery, misunderstanding, and misdirection. How’s that for alliteration? I’d have added ‘confusion’ here too, but would have been unable to gloat over my clever use of M. By the end though, Mr Campbell sorts out the confusion and completes the story in a highly satisfactory way.

Told in first person by the three leading characters—Jack, the husband, Thea, the wife, and Fiona, the possibly deranged cop—this is a tour de force by Mr Campbell.

The married couple is well realised, believable, and described with all their faults and insecurities, but neither is completely likeable. Jack is weak and Thea is cold, and both have guilty secrets to hide from the authorities and from each other. I had a slight problem with the motivation of the detective, Fiona, which seems extremely suspect at first. By the end of the story, though, Mr Campbell explained her rather strange behaviour to my satisfaction. In fact, the whole story arc is extremely well handled, and, I can see this working well as a three-handed play.

By necessity, the minor characters are less well defined, but that didn’t detract from my enjoyment. They did what they needed to do by acting as antagonists and moving the story along rather well.

I have only one extremely minor gripe. One scene—the one with the golf clubs (no spoilers)—came as a complete surprise and should have left me shocked, shattered, and angry. Unfortunately, it didn’t, which probably had something to do with matter-of-fact way the victim reacted to it left me somewhat underwhelmed and a little disappointed. More should have been made of the outcome and the payback. In fact, I wanted more of this part of the story, but Mr Campbell preferred to leave us hanging. As I said, it is a minor gripe, but enough to cost the novel half a star on my arbitrary and rather harsh rating scale.

All that being said, I have no hesitation to recommend this novel to anyone who enjoys well-written, well-constructed, off-key, and darkly humorous stories. Nice work, Mr Campbell. Nice work indeed.

Thoughts on the cover art: Undistinguished. The font makes the text difficult to read when you view the cover as a thumbnail. 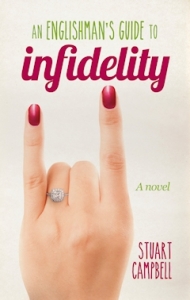 An Englishman’s Guide to Infidelity: a story of murder, mystery, misunderstanding, and misdirection by Dave Stanton

Jack Walsingham’s comfortable life is under pressure. With his bookshop going broke and past indiscretions catching up, Jack begins to dabble in embezzlement. Meanwhile his wife Thea, frustrated by a dead end in her career, is experimenting with some genteel theft of her own. But soon the couple are out of their depth, blackmailed by a figure from the past and implicated in two grisly killings. Their salvation comes in the form of Detective Sergeant Fiona Salmon, a recently widowed book-loving gym addict on the edge of an emotional melt down. A bizarre triangle develops, in which Thea, Jack and Fiona each find their own version of redemption in the face of betrayal and infidelity.

An Englishman’s Guide to Infidelity is at once a psychological thriller, a crime mystery, a dark comedy, and a love story.