I hate writing critical reviews of indie books, but here’s one I couldn’t avoid.

While the writing was largely acceptable and the story classic sci-fi (the lost tribe from a destroyed Earth searches the universe for a new home), the first book in this trilogy was marred by repetition, a fragmented plot, physiological inaccuracies, and an unsatisfying ending.

Repetition:
How many times did I read the couplet “swollen belly” when referring to one of the lead characters who happens to be, yes, you guessed it, pregnant. That’s just one example of unnecessary repetition for effect, there are many others, but I won’t repeat them here–see what I did there?

Plot fragmentation:
1) At the end of the first part (about 20% into the book), the main protagonist–the woman we invested our time in–survives a near death experience, and … is never heard of again–except in the author’s end notes.
2) At the end of part two (about 40% into the book), the main protagonist–the second female character we invested our time in–is murdered, and … is never heard of again (of course).
3) The story then follows the third main character (the man involved in the murder of character 2), in his search for traitors and a terrorist bomb. This part of the story is pretty good.
4) While a lot of this is going on another character (the hubby of the murdered character 2) is digging himself out of a hole–literally. I loved this part and wanted to read more of this character and his fight for survival.

Physiological inaccuracies:
And here’s the rant. Ready?
I lost count of the number of times the author refers to the blood “pumping through his veins” or a the “adrenaline surged through is veins.” Darn it, the human venous system is PASSIVE, there is no pumping (apart from through the pulmonary veins, which is a separate topic). Blood flows through the veins by gravity and as a result of skeletal muscular contraction.
Blood pumps through ARTERIES. Adrenaline (epinephrine) surges through ARTERIES. That is why medics palpate the pulse a the radial artery, the carotid artery, the femoral artery, etc. If medics palpated the veins, most people would be pronounced dead!

A minor point perhaps, but a valid one, I feel.

Unsatisfying ending:
I can understand the need to have a cliffhanger ending to encourage the reader to read the next book in the series, but for all (or most of) of the plots and subplots to be left hanging is a little too much for this reader to take.

Will I be uploading the rest of the series to my Kindle? not telling. I’ll let you guess.

Thoughts on cover art: The cover is stunning and very suitable for the genre. 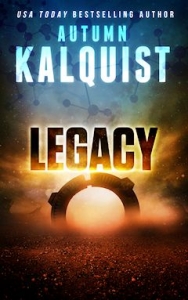 Legacy: a technothriller by Autumn Kalquist

Three hundred years ago, Earth suffered a mass extinction event. The last humans fled to the stars in search of a new home. In the darkness, they fought to survive. Now the fleet decays, and their hope of finding a better world is fading.

Era Corinth works to preserve the archives, but viewing them herself would be treason. When she’s faced with the possibility that her unborn child may be aborted due to a genetic defect, her fascination with ancient secrets escalates to obsession.

Brutal conspiracies and devastating betrayals threaten to fracture the fleet. And the colonists have forgotten the most important lesson their ancestors swore to remember: It only took one wrong choice to destroy life on Earth.

Will their descendants make the same mistake?