Home/Reads, Reviews/Book Review ~ Dream On by Terry Tyler
Previous Next

Solidly written, this is a gentle chick-lit of a decent standard. Shame about the swathes of italicised text, which indicated flashback or character overview, but grated on the eye and didn’t improve the reading experience.

The plot revolves around a rock start wannabe who turns out to be slightly delusional, but somewhat endearing, and the two women in his life. All three are portrayed well.The other characters (an ensemble cast) are well rounded, realistic, and easy to identify, if a little clichéd in places. I mean there’s a mad Geordie drummer, a sex-mad babe magnet lead guitarist, a TOWIE wannabe, and so forth…

Where ‘Dream On’ lost the two stars: This is a personal gripe, but I hate seeing parentheses in narration. To me, bracketing text makes it read like a Shakespearean aside. It pulls me (the reader) out of the story, which is not what a writer wants. It really isn’t.

Although the story is written in close third person, which I prefer to omniscient voice, there are a couple of forewarning asides that were designed to titillate, but ended up taking me out of the story, again. These along the lines of (no spoilers): Little did they know that by the end of the week, three of the five contestants would end up very disappointed.

All in all, this was an enjoyable, moderately involving, but unexciting ride.

Thoughts on cover art: Interesting, but it doesn’t say romantic comedy or chick lit. It leans towards crime thriller (if not for the guitar). 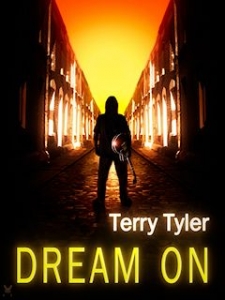 Dream On: a romantic comedy by Terry Tyler

Dave Bentley was born to be a rock star.
He believes he’s a reincarnated Viking warrior, too…
When Dave forms his new band, Thor, there are plenty of sleepless nights for Janice, his on-off girlfriend and mother of his son. Not only must she deal with the thrills and spills of life as a hardworking single mum, but also the imminent return of singer-songwriter Ariel Swan, Dave’s one true love.

Poor Janice. Dave is still the love of her life.
Ariel Swan returns to small town life – and Dave’s heart.
She and her friend Melodie (whose ambition is to be “a celebrity”) enter a TV talent competition, so Dave and the rest of Thor decide to make the most of the opportunity for possible fame and fortune, too. This adventure brings about big changes in the lives of all of them – none of which Dave could have anticipated.