This is a great mystery thriller in the classic, fast-paced ‘investigative reporter’ genre.

Well written in an easy style with believable characters and an interesting plot, Bone Maker has all the elements needed to make it well worth the reader’s time and money.

Will Finch, a dogged reporter with a tragic past, is sent to the sticks to write the story of the apparent accidental death of a federal witness in a fraud case. He’s been mauled by a black bear of all things (the victim, I mean, not Will). I say ‘apparent accidental death’ because all is not as it first appears. Finch soon discovers a web of deceit and corruption and finds himself in very deep waters.

We also have a very dodgy (and well-realised) sociopathic local sheriff, and a collection of locals who may or may not be in the sheriff’s pocket. Add to that a distressed maiden and political intrigue, and you have a plot complex enough for the most demanding thriller aficionado.

This is a great read.

A classic story told in a classic way and an ending that doesn’t leave you hanging, but makes you want to read the next in the series.

Yep, DF Bailey is one to watch and one to read.

Where does Mr Bailey lose his half star? For me, Will Finch, is a shade underdeveloped. I would have liked a little more of Finch’s inner angst. Still, he’s a likeable enough hero and one I enjoyed spending time with. I have no doubt the readers will learn more about Will Finch’s character as the series progresses.

Will I be reading more from DF Bailey? You bet. 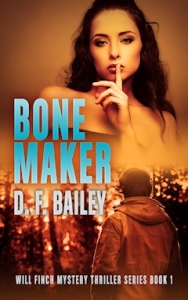 A death in the wilderness. A woman mourns alone. A reporter works a single lead.

If you have an appetite for organized crime series, you’ll love this new crime trilogy. Add a slice of noir novels, the juice of steamy PI mysteries, the zest of a financial thriller series. Soon you’ll be stewing in this new technothriller trilogy—and begging for more.

Following a family tragedy that has broken his spirit, crime reporter Will Finch returns to his news desk in San Francisco eager to reboot his career and renew his lease on life. When he’s assigned to cover the grisly death of a witness to a multi-million dollar bitcoin fraud, Finch discovers some troubling complications: A Mercedes-Benz abandoned in the wilderness. A wounded bear. A cop who rules a remote town with an iron fist. And the witness’s fiancée — a US senator’s daughter — knows there’s something mysterious about her lover’s death. But what?

Inspired by true events, Bone Maker is the first thriller in this series of noir crime novels — a crime trilogy that races from coastal Oregon to San Francisco, Moscow, Honolulu and Washington DC. It intersects the worlds of international finance, cryptocurrency software algorithms, and corruption that reaches from the US Senate to Turk Street in the Tenderloin District.