This novel asks some intriguing questions. Who has been killing teenage girls for nigh on twenty years? What links the killings? Why haven’t the cops identified the killer, and can the first victim help solve the crime?

We find the answer to all these questions within the pages of this well-written novel.

When she was twelve years old, Mia Germaine was involved in an accident that caused the death of her father. In the accident, Mia’s heart was damaged and she receiving a transplant from the first victim of the above-mentioned serial killer, the twelve-year-old Alexis.

Scroll forward twenty years and Mia starts having dreams, apparently from Alexis, in a vivid and terrifying case of the phenomenon known as, ‘organ memory’. The theory posits that the transplanted heart is telling Mia who killed Alexis.

In this taut murder mystery, we have an evil swine who’s been killing young girls with impunity for years and the local police don’t have a clue who he is or how to catch him. We also have a plucky female hero who’s determined to catch said serial killer despite the risk to her relationships and her life. On top of that, we have the occasional glimpse from inside the head of the killer and from this we learn his sick motivation. Add to that a growing list of suspects, each as plausible than the last, and Ms Crane gives the reader a great serial killer whodunit with a twist—organ memory.

Do we also have a satisfying ending where everyone lives happily ever after? Heck now, that would be telling and as you know, I don’t do spoilers.

Add in a few stellar and shocking scenes that had my pulse racing and others that had me pulling for Mia, and you have a book to recommend. I thoroughly enjoyed this story and cheered Mia along the whole way through the book. And given that I’m a cynical old soul, that’s a neat trick for Ms Crane to have managed.

I can recommend this book to anyone who enjoys a good crime thriller.

So, why did I knock off the half star? A number of reasons. First, I’m a mean SOB and very hard to please. Second, I worked out (some might say, guessed) the killer’s identity quite a while before the ultimate revelation. Third, and finally, I have a problem with the ‘organ memory’ theory—I’m a scientist, remember, and had to suspend my disbelief at that part. On the other hand, suspension of disbelief isn’t a bad thing for a reader and Ms Crane handled that part of the story in a subtle, understated manner. Bravo. 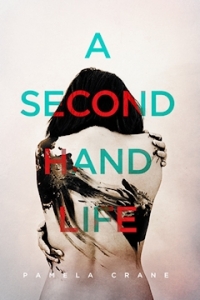 A Secondhand Life: a good crime thriller by Pamela Crane

In a freak collision when she was twelve, Mia Germaine faced death and the loss of her father. A heart transplant from a young murder victim saved her life, but not without a price. Twenty years later, chilling nightmares about an unresolved homicide begin to plague Mia. Compelled by these lost memories, she forms a complicated connection to the victim—the girl killed the night of Mia’s accident—due to a scientific phenomenon called “organ memory.”

Now suffocating beneath the weight of avenging a dead girl and catching a serial killer on the loose dubbed the “Triangle Terror,” Mia must dodge her own demons while unimaginable truths torment her—along with a killer set on making her his next victim.

As Mia tries to determine if her dreams are clues or disturbing phantasms, uninvited specters lead her further into danger’s path, costing her the one person who can save her from herself. More than a page-turning thriller, “A Secondhand Life” weaves a tale of second chances and reclaimed dreams as this taut, refreshing story ensnares and penetrates you.