As promised the other day, here’s the second character bio from the book…

Description: Slim and vital. His mouth forms a natural frown but he has warm eyes. His hair is long and wavy (like Frank’s) but salt ‘n’ pepper.

Background: Widower, Pete lost the love of his life, Laura, to bone cancer three-years ago. He dotes on his children, Frank, whom he adopted when aged four, and Paula, a miracle baby, born seven months after Frank’s adoption.

Since Laura’s death, Pete has devoted his life to his children and his racing team and it looks as though his dream of helping Frank into the big league of Formula One is about to come true.

Paula doesn’t come second to Frank, but Pete’s an engineer and Paula’s a musician and he doesn’t understand the artistic mind. Apart from funding her studies, Pete can do nothing for Paula but stand in the wings and listen in stunned admiration to her music.

For nearly a year, Pete has kept a secret from Frank, but now the season’s over the secret’s out…

If you have any comments or questions, you know what to do – and don’t forget to enter the raffle. 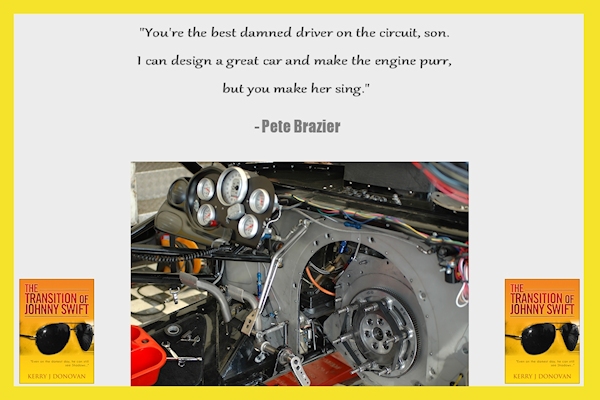