Background: Frank is the adopted son of Pete Brazier, owner and chief designer of Team Brazier Racing (TBR). Thanks to Pete and his engineering team, Frank’s bright yellow TBR MKIV is the fastest in the F2500 championship–almost unbeatable in the hands of a master.

Frank’s nickname stems from his driving style and his surname, not his off-circuit personality. In the car, he focuses on the win. He’s determined but fair. Off-circuit, he’s cool, considered, and charming. He has to fight off an army of female fans. He agrees, it’s a tough job, but he can take the strain.

He spends hours in the gym, and believes that physical fitness is one of the keys to his driving success. A ‘never-smoker’, Frank hates junk food and Paula, his adoptive sister, describes him as a ‘health food Nazi’. Frank is very protective of the nineteen year-old Paula.

When we meet Frank for the first time, he’s sitting in the cockpit of his TBR, awaiting the start of the final race of the F2500 season. He needs one point to secure the Championship title and earn a place in next season’s F1 circus. He’s aiming for the big leagues. There’s a problem though. 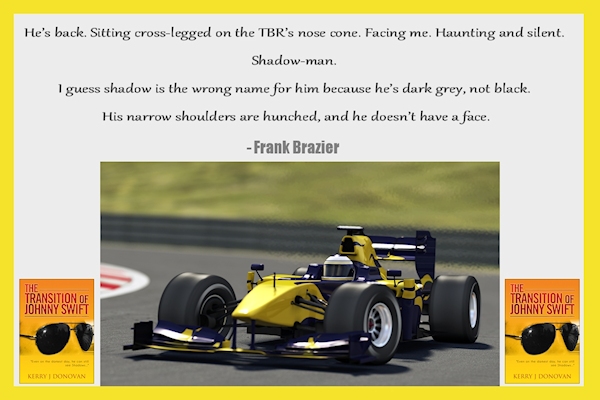