Home/Books, News/New Release – Ryan Kaine: On The Wing
Previous Next

Ryan Kaine: On the Wing is out today! Book seven in the hard-hitting, action-packed Ryan Kaine’s 83 action thriller series On the Wing is live now – what a great birthday present. Have you picked up your copy yet? If not, here’s what you’re missing. 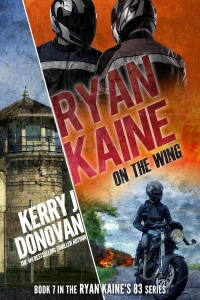 A member of The 83 is viciously attacked …

…Someone wants her to die in prison.

Who will risk everything to save her?

When alleged murderer, Melanie Archer, is violently assaulted and left for dead by unknown attackers, she reaches out to the only organisation who might be able to save her life, The 83 Trust.

But before international fugitive and former Royal Marine, Ryan Kaine, puts his team in danger to help her, he wants to determine her guilt or innocence—in person. Against the advice of his closest allies, he and his insistent partner, Lara, con their way into the lion’s den—the last place he’d ever expect to go willingly.

Unarmed and with no eyes or ears inside the prison, Kaine and Lara are trapped, with only a hasty disguise and a false identity preventing them from taking a permanent holiday at Her Majesty’s pleasure …or worse.

Using his well-honed instincts, a mountain of luck, and the fear of incarceration to his best advantage, Ryan Kaine is … On the Wing.

Who is Ryan Kaine?
Not met Ryan yet? If you haven’t read the first book in the series Ryan Kaine: On the Run, don’t worry you can check out the first episode by clicking on the cover below. Find out where Ryan’s exciting story began.