Ryan Kaine: On the Rocks

Home/Ryan Kaine: On the Rocks
Previous Next

Ryan Kaine: On the Rocks 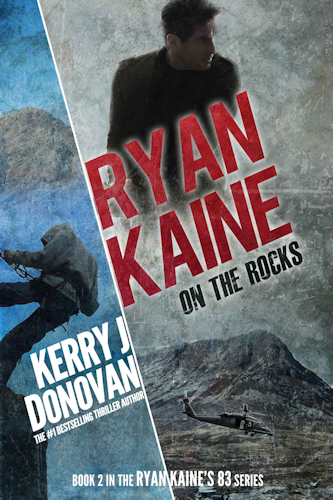 A schoolboy lies alone and dying on a Scottish mountainside. A highly experienced rescue team can’t find him. One man is the boy’s only hope.

When news of Martin Princeton’s disappearance reaches international fugitive and former Royal Marine, Ryan Kaine, he abandons the evidence that could help clear his name and heads to the Scottish Highlands. Officially, the authorities want Kaine in custody. Unofficially, there’s a bounty on his head.

Still hampered by injuries from the events that turned him into the most wanted man in Europe, Kaine uses the heavy burden of killing eighty-three people aboard civilian aircraft Flight BE1555 to fuel his new mission. He will protect the grieving families, The 83, at all costs.

Armed only with charm and an intimate knowledge of the region, Kaine must convince the rescue team of his good intentions and find out everything he can about Martin’s disappearance before they discover who Kaine really is.

Using his mountaineering knowledge, his special forces training, and his rapport with the locals to help him find the missing boy in time, Ryan Kaine is … On the Rocks.

Still raining.
Martin opened his eyes a crack.
Rained all bloody night. Hour after sodding hour. Didn’t let up for a single second and he couldn’t do a bloody thing to take shelter.
Pain. Nothing but pain.
Dawn had brought hope, but it also brought heavier rain.
He used to love Scotland. Hated the place now. Stupid country. Stupid weather. Stupid mountains.
Why didn’t he stay home? Nah, he wanted to be with his mates. Wanted to run from the well-meaning neighbours and their flowers and their Goddamned sympathy for Mum and Dad. Not for him though. Nobody asked how he was. Nobody gave a toss about the little brother. They left him to fend for himself. Bastards.
And where did he end up?
Halfway down a cliff, alone, bleeding, and freezing to death.

Huge crushing drops fell onto his face, into his eyes. The cold had numbed his skin, and the freezing air sliced through his thin clothing.

So damned cold.
Why didn’t he put on his heavy jacket when he had the chance? Too bloody stupid. That’s why not. The other lads in the party, the ones with the muscles that made girls fawn all over them, they didn’t wrap up warm against the cold and the rain, so he hadn’t either. They’d shamed him into it and now he was going to die alone in nothing but a pair of jeans, a T-shirt, and a light summer jacket.
Pride and macho stupidity was going to kill him in the end.
Losing Matt in the plane crash, when was it? A week ago? Just a week? Jesus. Focusing on Matt’s death had made him careless, and the mountains were going to make him pay.

Overnight, the darkness had been total. No stars, no moon, no light. Nothing to see and nothing to hear but the wind whistling through the rocks and his pitiful weeping.
He tried not to cry like a girl, but couldn’t help it.
If dying alone in misery wasn’t a good enough reason to cry, then what was?
Besides, up here, no one could see or hear him. No one to laugh at his blubbing.
Right on cue, a pulse of agony ripped up his left leg and into his knee. It was probably broken. Yeah, that’s right. Martin Princeton, a weakling who got lost on a school trip. That’s what they’d think of him—a pitiful weakling, a cripple.
Better to just die and get it over with than have them look at him with pity.
How long would it take to die? Would he last the day?
He knew people could survive without food for days, but the cold, the fucking cold.
He couldn’t bear the thought of another endless night with nothing to focus on but the pain every time he moved and the blinding, screaming headache that clamped his temples so tight he thought his skull was going to explode.
Martin tried to keep still, but the shivering wouldn’t let him. Each shudder fired electric shocks through his arm and leg. Music—his normal escape from the world—wouldn’t come. Whatever he tried, he couldn’t make the tunes play in his head.
It had already been more than a day and nobody had come for him? Why not? Did anyone know he was missing? Had anyone raised the alarm?
And what would happen to Mum and Dad now?
Again, he cried. Not from anger or self-pity this time, but for what his death would do to his ’rents.
They’d already been through so much since the plane crash. Mum collapsed into Dad’s arms when the police broke the news that Matt had died aboard Flight BE155. One of the eighty-three people murdered by the madman, Ryan Kaine.

Ryan-fucking-Kaine.
Monster. Terrorist bastard. Fucking killer.
Ryan-fucking-Kaine killed Matt.
Oh, God.
His big brother was dead.
At least Matt had gone quickly. Always was the lucky one. Not like Martin. No, Martin was going to die alone on a bloody mountain. Exposure would get him, or gangrene. Painful and slow.
Matt died but Martin was still alive—at least for the moment. But he wished he was dead—ungrateful bastard.
Oh, God. Matt, I’m so, so sorry.
The big brother who’d tormented and teased him all his life, but who’d have taken a bullet for him, would never come back. He’d never see Matt again.
Fuck.
He’d never see anyone again.
He should have stayed with Mum and Dad. Should have stayed home. The sadness in Mum’s eyes when he told her he was still going to Scotland despite Matt’s death. He didn’t ask. Didn’t even bloody ask. Instead he’d been angry with her for insisting she walked him to school like he was a baby, too small to cross the road on his own.
“For God’s sake, Mum. Stop crying. It’s embarrassing,” he’d said under his breath outside the school gates while the other lads stood by, trying not to smirk. “I’ll be back in plenty of time for the funeral.”
Why had he even said that? What was he thinking? She’d reacted as though he’d slapped her across the face. And he hadn’t even apologised. He’d been a selfish bastard, didn’t even say goodbye, and where was he now? Dying on a Scottish mountain, that’s where.
Fucking idiot.
All because he wanted to see the eagles up close.
Stupid, stupid, stupid.
To think he’d fallen for it.
What would Matt have said?
“You’re a complete moron, baby brother. What have I told you about reading between the lines? Don’t trust anyone! You fuckup. Fancy letting Mum and Dad down like this now I’m not here to save your sorry arse.”
He’d have said it with a kindly smile and maybe ruffled his hair, but he’d have said it just the same.
Sorry, Matt. Sorry for being a fuckup. Sorry for everything.

A raindrop fell on the tip of his nose and ran into his mouth. He licked the water away. No chance of dying of thirst in Scotland.
Had a better chance of fucking drowning.
He sneezed. The movement shot a light sabre through his leg, his shoulder screamed, and the crushing vice around his head tightened.
Martin pushed his free fist into his mouth, bit down hard on the knuckles, and screamed in silence. Once again, he let the tears flow.
He stared up at the jagged edge of the cliff face in the distance, the one with its recently crumbled ledge.
If there were any search teams, would the broken rocks point them to him? Could he last long enough for that?
Time passed slower than every single maths lesson he’d ever had with Ma Bancroft. Jesus, when would they put the old cow out of her misery? She had to be at least fifty.
Seconds, minutes, hours passed.

The rain lightened and finally stopped, but a heavy blanket of fog took its place.
Last night, before the sun set, the drubbing of a helicopter’s rotor blades had given him brief hope, but the bloody thing had flown right over his position without stopping. The spotters hadn’t seen him, but why should they? The rocks hid him.
Maybe the helicopter hadn’t been searching for him after all. Perhaps someone else was lost on the mountain.
Oh, Jesus. Jesus.
They weren’t coming. No one was coming.
He’d fucked up for the last time.
“Mum, Dad, Matt, I’m so sorry I let you down.”
Martin closed his eyes to the cold grey mist and waited for death.

To read more, buy the book in either Kindle, paperback, or audiobook format, and to be the first to know about new Ryan Kaine books, join The Friends of Ryan Kaine newsletter.