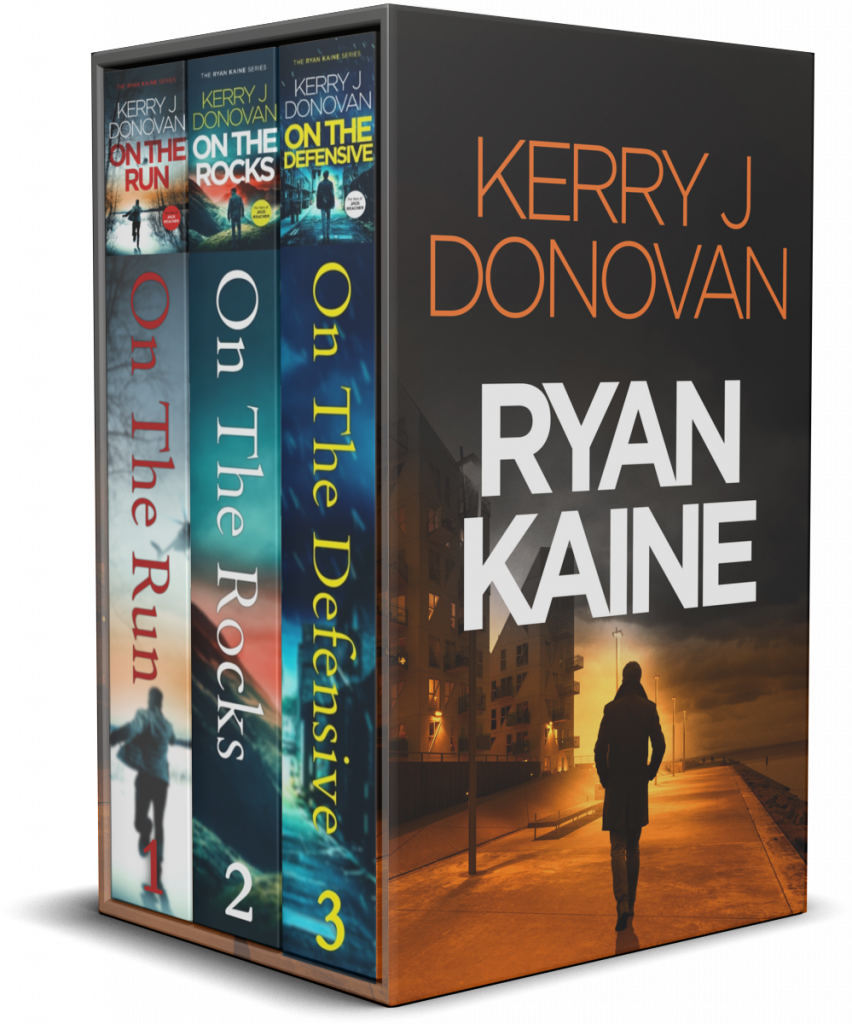 The first three books in the Ryan Kaine series:

When an apparently routine operation goes horribly awry, veteran Marine, Ryan Kaine, is targeted and forced to go on the run. In this action-packed box set, he’ll set out on missions that will test his limits — and put his life on the line…

On the Run
A passenger plane explodes. Eighty-three people die. One man is responsible.

On the Rocks
A schoolboy lies alone and dying on a Scottish mountainside. A highly experienced rescue team can’t find him. One man is the boy’s only hope.

On the Defensive
A hard-working family is threatened. Two vicious killers and their ruthless boss are to blame. One man stands between them.

From the pen of Kerry J Donovan, the Ryan Kaine series is heart-stopping, action-packed, and full of justice being meted out to the people who deserve it most.

Ryan Kaine is an explosive addition to the great military action characters in the tradition of Lee Child, Mark Dawson, and Matt Rogers.

Ryan Kaine is on the run...

A seemingly routine operation ends in tragedy when eighty-three civilians are killed in an aircraft explosion. Kaine, a highly decorated former Royal Marine, becomes the target of a nationwide manhunt; the police want him on terrorism charges, and a sinister organisation wants him dead.

In a desperate attempt to prove his innocence, Kaine is forced to rely on two women he barely knows — a country veterinarian who treats his wounds and an IT expert with a dark secret of her own.

Kaine must battle his overwhelming guilt, life-threatening injuries and strong moral code as he hunts for the people who turned him into a mass-murderer.

Using his skill in combat, gut instincts, and new-found allies, can Kaine uncover the truth and find redemption before the net finally closes?

Book 2: On the Rocks

Ryan Kaine is on the rocks….

Fuelled by his guilt at the loss of eighty-three civilians onboard aircraft BE1555, international fugitive, Ryan Kaine, vows to protect their grieving families — The 83 — at all costs.

When schoolboy Martin Princeton lies alone and dying on a Scottish mountainside, news of his disappearance spurs Kaine to abandon the pursuit of evidence that could clear his name. Officially, the authorities want Kaine in custody — unofficially, there’s a bounty on his head.

Still hampered by injuries from events that turned him into the most wanted man in Europe, Kaine must convince the mountain rescue team of his good intentions and find out everything he can about Martin’s disappearance… before they discover who Kaine really is.

Book 3: On the Defensive

Ryan Kaine is on the defensive… .

Kaine, a wanted man on the run, receives a mysterious text with an address and the terse message: “Help them”.

When unscrupulous men try to force Greek restaurateurs, the Constantines, out of their business and their home, they stand firm. That is until the head of the family, Orestes, is attacked and left fighting for his life. Their neighbours are running scared. The police are turning a blind eye.

With one of The 83 in trouble, Kaine flies straight back into the heart of danger, without a second thought.

Trying to avoid the attention of the thousands of facial recognition cameras installed in London, Kaine finds himself waist deep in a mesh of treachery, lies, and deception, caught in a fight to the death that he cannot — and will not — afford to lose.