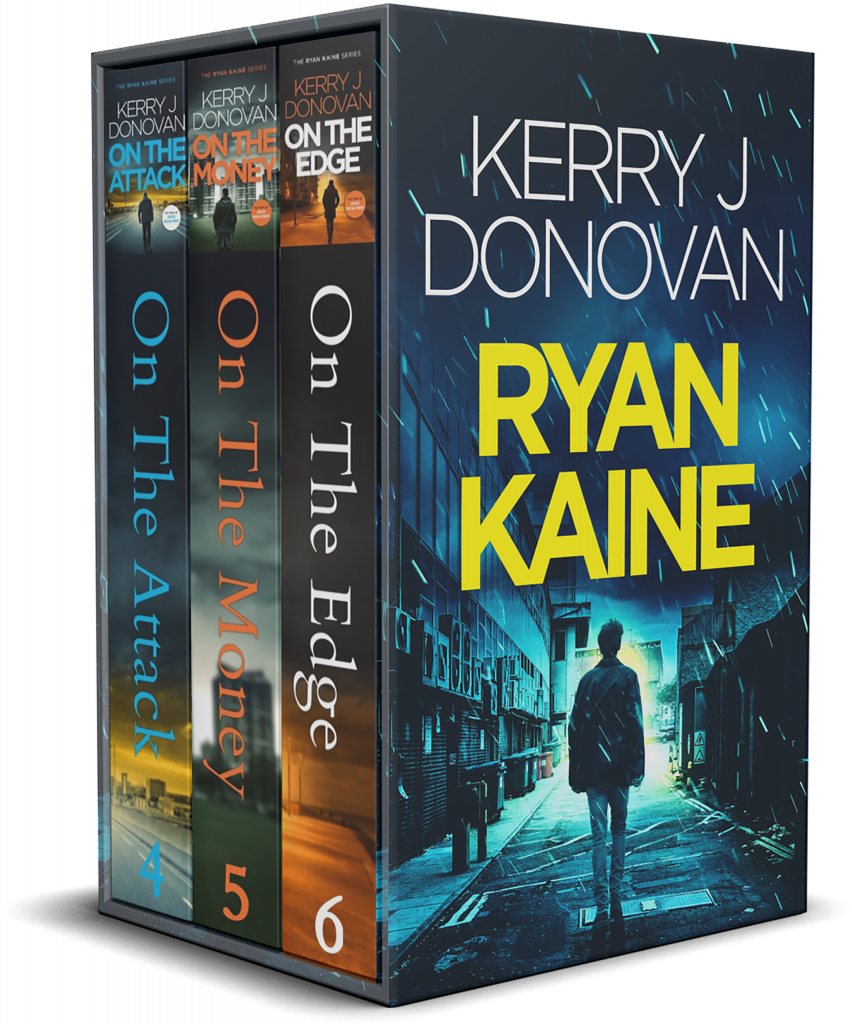 Books 4-6 in the Ryan Kaine series:

On the Attack
An innocent woman is viciously attacked. An underworld kingpin and his brutal thugs close in. One man can deliver justice to them all.

On the Money
A member of The 83 dies in an apparent accident. The faceless leader of a drug gang rules his neighbourhood. One man will find the truth.

On the Edge
A medical training course in Denmark. The perfect chance to prove herself. One woman is on a mission to do just that.

From the pen of Kerry J Donovan, the Ryan Kaine series is heart-stopping, action-packed, and full of justice being meted out to the people who deserve it most. Fans of military action will love this series.

Ryan Kaine is an explosive addition to the great military action heroes in the tradition of Lee Child, Mark Dawson, and Matt Rogers.

Book 1: On the Attack

Ryan Kaine is on the attack…

When Angela Shafer’s stalker threatens to kill her, she is forced to call upon the services of The 83 Trust. Ryan Kaine vows to deliver justice in the only way he knows how.

After reaching Angela’s home too late to prevent a terrible atrocity, Kaine calls in reinforcements in the form of his most trusted men; Danny Pinkerton and William Rollason. But in order for Angela and her daughter to be truly safe, Kaine and his team need to dismantle an entire criminal organisation.

As an underworld kingpin and his brutal thugs close in, Kaine will need all the help he can get…

Book 5: On the Money

Ryan Kaine is on the money…

When a member of The 83 dies in an apparent accident, Kaine knows better.

A faceless leader of a drug gang rules the dead man’s neighbourhood and Kaine and his partner, Lara Orchard, go undercover to discover the truth. Offering financial support to the dead man’s grandson, they draw the attention of the local crew. Before they can complete their mission, Lara is attacked, and all bets are off.

Kaine prepares to take on the gang alone, but Lara will not be side-lined by a bunch of street thugs. If Kaine needs her help, she’s sure as hell going to provide it.

Together, Kaine and Lara are about to serve justice to them all…

Ryan Kaine is on the edge….

Lara Orchard is on a mission to prove herself.

Convincing her partner, Ryan Kaine, that she needs combat medical training, they fly to Denmark under assumed identities.

Kaine is on high alert, keeping a watchful eye on her throughout the course — but it’s not her medical skill he’s worried about.

Despite knowing the gunfire and the bombs aren't real, Lara struggles to control her fear, but leaves herself exposed to a threat she doesn't see coming. In a desperate attempt to protect her, and breaking his own moral code and a few bones, Ryan Kaine is pushed to his limits…