Home/Books, News/New Release – Ryan Kaine: On The Edge
Previous Next

Ryan Kaine: On the Edge is out today! In a short adventure, featuring former vet, Lara Orchard, book six in the hard-hitting, action-packed Ryan Kaine’s 83 action thriller series On the Edge is live today. Have you picked up your copy yet? If not, here’s what you’re missing. 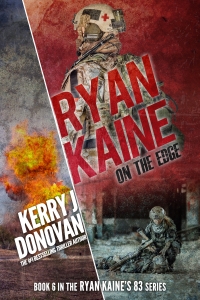 A medical training course in Denmark. The perfect chance to prove herself. One woman is on a mission to do just that.

When former country vet, Lara Orchard, convinces international fugitive, Ryan Kaine, she needs combat medical training, they travel to Denmark under assumed identities. While Kaine keeps a very close eye on Lara throughout the course, it’s not her medical skill he’s worried about. Despite knowing the gunfire and the bombs aren’t real, Lara struggles to control her fear, but leaves herself exposed to a threat she doesn’t see coming. In a desperate attempt to protect her, and breaking his own moral code and a few bones, Ryan Kaine is … On the Edge.

Who is Ryan Kaine?
Not met Ryan yet? If you haven’t read the first book in the series Ryan Kaine: On the Run, don’t worry you can check out the first episode by clicking on the cover below. Find out where Ryan’s exciting story began.