In addition to Friday-Fortnight Interviews, I will, from time to time, add the occasional interview with friends and authors from around the world. Here’s the first one!

KH: The book is inspired by a series of events in Pakistan. When we go backward to the 1980s and the Afghan conflict, or the Soviet invasion of Afghanistan, a series of events began in Pakistan that the country still suffers with today. The Taliban, terrorism, and the drug culture are all remnants of that time and we have not been able to escape it because the US invasion of Afghanistan brought it to our doorstep again.

I also think that part of my motivation to write this novel was to help people understand that Pakistan is not a nation of terrorists. We have the misfortune of having self-serving politicians with no checks and balances, so the “anti-state” elements are able to prosper because many politicians and law enforcement personnel are involved for financial benefits.

KJD: Those are interesting and important themes and I commend you for airing them. To broaden the discussion, if you had to co-author a book, who would be your ideal partner and why?

KH: I think that my ideal co-author would be John LeCarre. His ability to craft intricate and detailed characters is amazing. While I think my characters are quite challenging, he just takes it to a different level.

KJD: Agreed, Le Carre is a demonstrable master of the art form. Can you me a little about yourself?

KH: Certainly, I was born in Pakistan, was raised and educated in the United States, and returned to Pakistan in 1997 to pursue emerging business opportunities. I’ve spent my time in the country comparing the on-ground Pakistan with everything that I heard in the media. What a difference! There are times when I think they make up the stories that are written about the country.

As an entrepreneur, I have been able to build a successful marketing and brand management company in Karachi that services both domestic and international clients, which has helped with supporting my family while I build my writing career.  Since publishing Agency Rules in January 2014, I have written for a number of domestic publications and a few international ones, while I work on the next two books of the Agency Rules series.

KM: I own a marketing company that works with international clients to develop and promote brands. We do both offline and online, so I put a great deal of the principles to work in promoting my novels.

KJD: Do you live in Pakistan full-time?

KH: Yes, absolutely. Like my novels, I am based in Pakistan.

KJD: When did you first start writing?

KH: I wrote my first short story when I was 15 as a class project. I wrote my first poem for a competition at 17, didn’t win. I didn’t take up serious writing until I graduated from university and entered the professional world. With a degree in marketing, you really do become a storyteller, which most people don’t understand. I finally started to write a novella when I was 35, I think. I’m 43 now and finally got a story together that works and I am proud of enough to publish.

KJD: It’s great, fantastic. I love it when that happens. I didn’t publish my first novel until I was 56, so you have years more fun and anguish ahead of you. Teehee.

What’s your writing process? Are you a pantster, a plotter, or somewhere in between?

KM: I’m a bit of both. I tried to plot the chapters, but that didn’t work because my writing just takes off when I sit down. I end up going in directions that I didn’t even think of while plotting. So I guess that I sit in the middle. I plot out the basic ideas for a chapter, but the writing takes me in the direction that it wants to go.

KJD: In all the conversations I have with authors, most tell me the same thing. Perhaps there is a trend here. When and where do you write?

KM:  After midnight, at my desk with my headphones on. I usually start out with a pen and paper and freeform write. From there, I sit down at my laptop and start transcribing from the paper, editing and expanding as I transcribe. I get much more done with this method than when I sit down and try to type it out.

KJD: Pen and paper? Blimey, that’s very old school. Can’t remember when I last held a pen to do anything other than sign my name on cheques.

What sorts of conditions are most conducive to your writing productivity?

KM: Dead quiet. I can’t write when there are things going on around me. I need to get lost in the world that I am creating on the page, otherwise the scenes and characters don’t come to life for me.

KJD: I absolutely agree, silence is essential for me too. What’s your favourite aspect of being a writer?

KM: Being able to express myself. I am a very social, interactive person, so I never thought that I would be able to channel all my emotions, thoughts and ideas into paper. It took a great deal of writing and wasted paper to get to the point where I could help people visualise what I was doing, thinking and saying, but I got there.

KJD: And your least favourite?

KM: Editing and revisions. I hate it. My editor and I spend hours talking about the revisions that she recommends. I argue my side, she argues hers. We try to get to a place where we are both happy with the storyline, character development, and plot. Sometimes, it takes numerous sessions and conversations to get there.

KJD: I feel you, Khalid, that’s where the hard work really begins. What are the biggest challenges you face as a writer?

KM: I write about an extremely volatile topic and live in a country that doesn’t like to have these things exposed. The biggest challenge that I face is controlling what I write so that I don’t end up in a dark hole somewhere with terrorists standing over my beaten body.

KJD: To many, that might sound fanciful and paranoid, but in your situation, never. I salute your bravery. Moving on to a lighter topic, who is your favourite writer and why?

KM:  I don’t have a single favourite. I love to read spy thrillers so Tom Clancy, John le Carre, Fredrick Forsyth, Daniel Silva, Ian Fleming and Robert Ludlum are big influences. But at the same time, I really enjoy the new voices in the espionage world like Tom Rob Smith, Matthew Farrugia, and Matthew Reilly.

KJD: And your favourite book?

KM: Wow… best book? That would actually be a tossup between Tinker Tailor Soldier Spy and The Afghan. Both are fantastic stories with characters that you can really identify with, if you are a true spy fan.

KJD: Do you use any specific writing tools?

KM: Pen. Paper. A laptop and my heavy metal music. That’s all it takes for me.

KJD: I thought you needed silence? Must be the vagaries of the muse, eh?

KJD: Precisely. How long does it typically take for you to write your first draft?

KM: I wrote the first draft of Agency Rules – Never an Easy Day at the Office in about 4 months. That was after about 6 years of research, interviews, and conversations with people in the intelligence industry. The new book has taken me about the same time.

Then, we start the editing process and the beta reader process. So with all the writing, editing, and beta process, it takes about 6-7 months to finish the novel.

KJD: That’s faster than most. Tell me who is your favourite character from one of your books? Why?

KM: Since I only have one book published right now, my favourite character is Kamal Khan, the protagonist in my series. He is very dark and sinister at times through the first book. He is also very conflicted over the things that he must do as an intelligence operative. This isn’t a character that is black and white. He is many shades of grey.

KJD: Shades of grey? We son’t go there.

Here’s a bit of fun, if you could have one superpower what would it be?

KM: I have had a great deal of bad luck and bad people in my life that have done some serious damage to me in the past. It took me a long time to put that behind me and repair myself so that I could move forward to live the life that I knew I could have. If I could have one super power, I would want to be able to heal people’s scars, because everyone has the potential of being superb and no one, and I mean no one, should be allowed to stop them from achieving that.

KJD: That is a wonderful thing to want. You, sir, are a gentleman. It’s been wonderful to meet you. 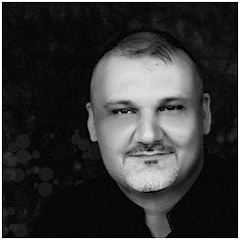 By day, Khalid Muhammad is a mild-mannered business executive keeping busy running a marketing and brand management company. By night, his alter ego emerges; one that has a penchant for sadistic retribution towards those who wrong others, and that spends its time devising intricate and detailed plans for a nefarious end.

Born in Pakistan’s troubled Swat Valley, educated and raised in the United States, Khalid returned to Pakistan almost 17 years ago and fell in love with his country. His debut novel, Agency Rules – Never an Easy Day at the Office, is a journey behind the headlines about Pakistan, the world’s most dangerous place, to deliver an intense story that will challenge the reader to question everything they have been told about the country.

He began writing to let the wickedness escape, as the other option means a great deal of blood, numerous torture implements and… well, infinite ways to dump a body. It’s safer for everyone involved and less dangerous for the guilty… until he writes another book.

Celebrated as a ragtag force that defeated and broke the Soviet Union, no one predicted the Mujahideen would bring with them a plague that would spread like wildfire through Pakistan in the years to follow. When the battle-worn fighters returned with no enemy or war to fight, they turned their sights on the country that had been their creator and benefactor.

From the same battlegrounds that birthed the Mujahideen, a young Kamal Khan emerges as a different breed of warrior. Discarding his wealthy family comforts, Kamal becomes a precision sniper, an invincible commando and a clandestine operative bringing intimidation, dominance and death with him to the battlefield. Ending the plague is his prime directive.

Shrouded in political expediency, hampered by internal power struggles, international espionage and doublespeak that makes Washington’s spin doctors proud, Kamal’s mission is a nightmare of rampant militant fundamentalism that threatens to choke and take Pakistan hostage. For him, the fight is not just for freedom, but the survival of a nation.