If you’ve been waiting for the conclusion of the Melanie Archer case from Ryan Kaine: On the Wing, or have been looking forward to the latest David Jones casebook, you’re in luck!

The DCI Jones Casebook: Melanie Archer is out today! 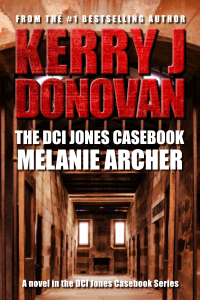 The long-awaited fifth novel in the DCI Jones Casebook series of police procedurals.

Is she innocent, guilty, or something in between?
When Melanie Archer is arrested for murdering her husband, she swears she is innocent. The police don’t believe her and throw her in jail, where someone tries to kill her.
After international fugitive, Ryan Kaine, rescues her from another attempt on her life, Melanie remains desperate to clear her name. Kaine invites his occasional friend, DCI David Jones, to reopen her case and Melanie lays her life and her reputation in Jones’ hands.
Knowing that Kaine won’t stick his neck out for anyone who doesn’t deserve his protection, Jones interrogates Melanie then calls in a few favours. Conveniently, the case lands in his in tray.
With limited resources, an uncooperative police unit, and a missing suspect-turned-witness, can Jones find the truth when everyone is lying—even some of his own?

I hope you enjoy.