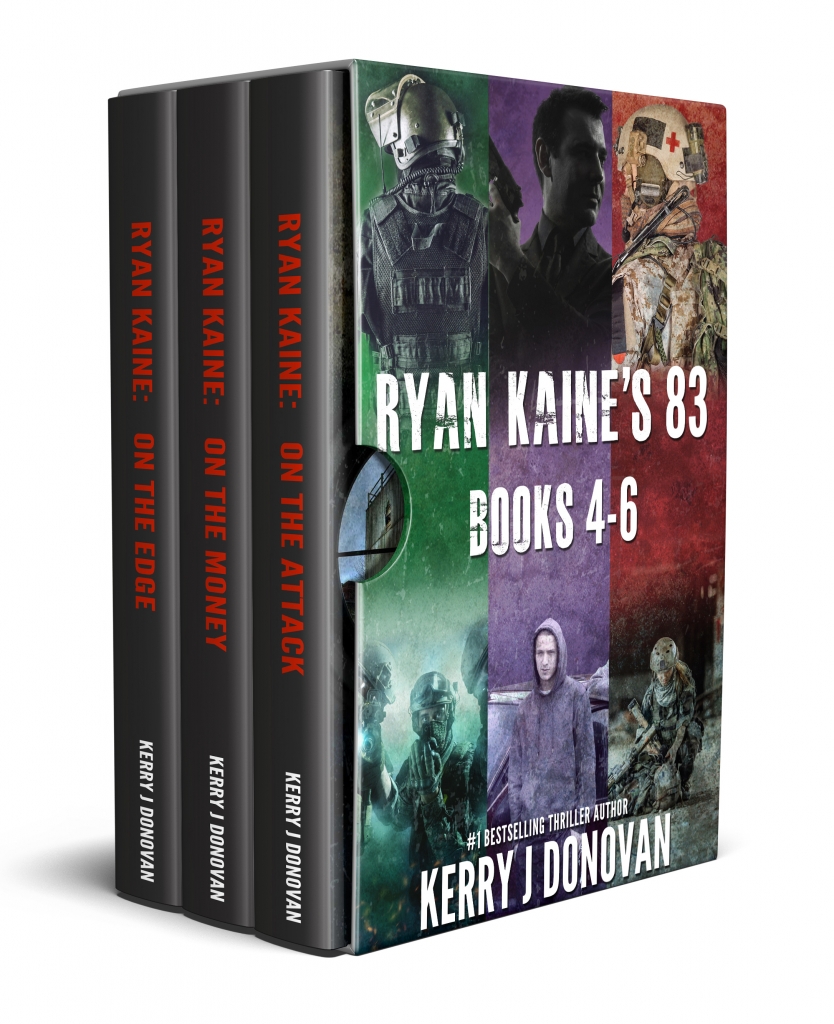 Ryan Kaine: On the Attack
An innocent woman is viciously attacked. An underworld kingpin and his brutal thugs close in. One man can deliver justice to them all.

Ryan Kaine: On the Money
A member of The 83 dies in an apparent accident. The faceless leader of a drug gang rules his neighbourhood. One man will find the truth.

Ryan Kaine: On the Edge
A medical training course in Denmark. The perfect chance to prove herself. One woman is on a mission to do just that.

From the pen of Kerry J Donovan, the Ryan Kaine’s 83 series is heart-stopping, action-packed, and full of justice being meted out to the people who deserve it most. Fans of military action will love this series.

Ryan Kaine is an explosive addition to the great military action heroes in the tradition of Lee Child, Mark Dawson, and Matt Rogers.

Book 1: On the Attack

An innocent woman is attacked. An underworld kingpin and his brutal thugs close in. One man can deliver justice to them all.

When a stalker threatens Angela Shafer’s life and the police aren’t interested, a frantic Angela contacts the only people who might be able to help—an organisation who reached out to her after her sister died aboard Flight BE1555—The 83 Trust.

After reaching Angela's home too late to prevent a terrible atrocity, former Royal Marine and international fugitive, Ryan Kaine, swears to bring the people responsible to justice. He calls in reinforcements in the form of his most trusted men, Danny Pinkerton and William Rollason.

Kaine and his team can’t simply take down the vicious kingpin and cut the head off the snake, or Angela and her daughter will never be safe. They’ll need to dismantle the entire criminal organisation, brick by evil brick.

Using his intolerance of bullies, the special talents of his former colleagues, and the compassion and medical skills of his country vet, Lara, Ryan Kaine is … On the Attack.

Book 5: On the Money

A member of The 83 dies in an apparent accident. The faceless leader of a drug gang rules his neighbourhood. One man will find the truth.

When former Royal Marine, Ryan Kaine, and his partner, Lara Orchard, go undercover to offer financial support to the dead man’s grandson, they draw the attention of the local gang crew. Before they can complete their mission, Lara is attacked, and all bets are off.

Leaning heavily on his enigmatic hacker friend, a new recruit to his growing team, and a surprise ring-in, Kaine puts Lara out of harm’s way and prepares to take on the gang alone.

But Lara has stuck by Kaine since the day he brought a war to her quiet country veterinarian practice and literally set it on fire. She will not be sidelined by a bunch of street thugs. If Kaine needs her help, she’s sure as heck going to provide it.

Using specialist electronic equipment, a questionable inside man, and his proficiency in hand-to-hand combat, Ryan Kaine is … On the Money.

A medical training course in Denmark. The perfect chance to prove herself. One woman is on a mission to do just that.

While Kaine keeps a very close eye on Lara throughout the course, it's not her medical skill he's worried about.

Despite knowing the gunfire and the bombs aren't real, Lara struggles to control her fear, but leaves herself exposed to a threat she doesn't see coming.

In a desperate attempt to protect her, and breaking his own moral code and a few bones, Ryan Kaine is ... On the Edge.

I'd love to know your thoughts... Cancel reply