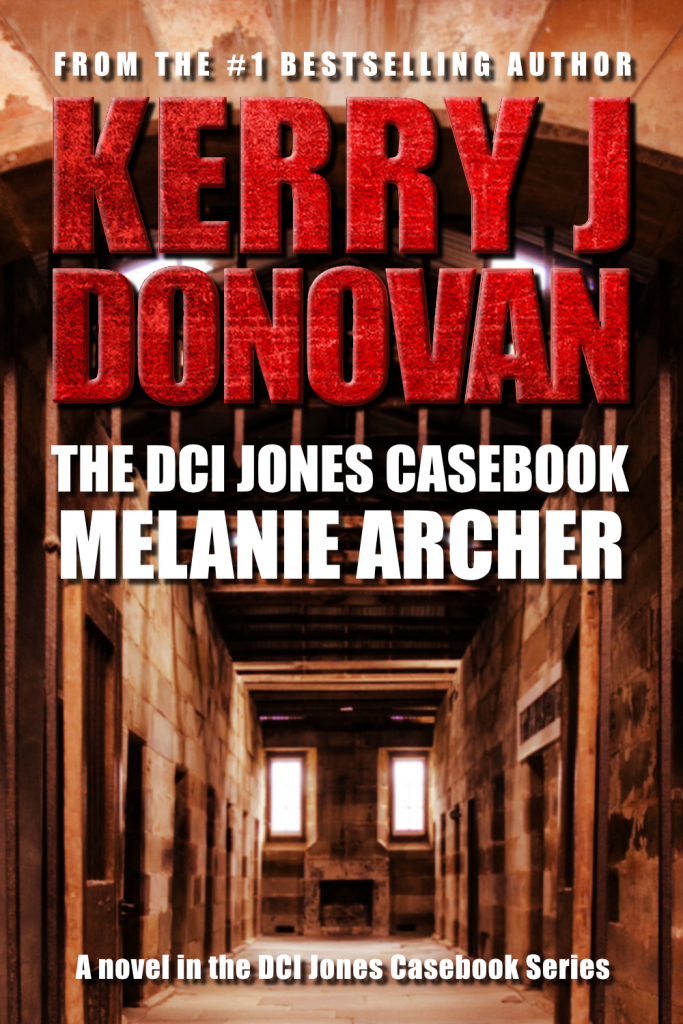 Is she innocent, guilty, or something in between?

When Melanie Archer is arrested for murdering her husband, she swears she is innocent. The police don’t believe her and throw her in jail, where someone tries to kill her.

After international fugitive, Ryan Kaine, rescues her from another attempt on her life, Melanie remains desperate to clear her name. Kaine invites his occasional friend, DCI David Jones, to reopen her case and Melanie lays her life and her reputation in Jones’ hands.

Knowing that Kaine won't stick his neck out for anyone who doesn't deserve his protection, Jones interrogates Melanie then calls in a few favours. Conveniently, the case lands in his in tray.
With limited resources, an uncooperative police unit, and a missing suspect-turned-witness, can Jones find the truth when everyone is lying—even some of his own?

Detective Chief Inspector David Jones stepped outside. He had to raise an arm to shield his eyes from the bright sunlight slicing over the eastern hills. Although welcome after three days of incessant rain, the sun had yet to add its warmth to the morning. Jones coughed as the cold air hit the back of his throat and chilled his lungs. He pulled the heavy front door behind him and smiled as it closed easily against the jamb and made a satisfyingly solid clunk.
During the previous weekend, he’d found time to take a smoothing plane to the door’s leading edge and removed remove the sliver of wood that had been scraping against the frame, causing it to rub slightly. The new and smoothly efficient operating satisfied his unending and inexplicable desire for perfection.

If he couldn’t find perfection in his work, then he could at least strive for it in the travesty that was his private life.
Jones stood back and took a moment to admire the front elevation of his nearly-finished home. It had taken close to fifteen years, but he could finally see an end to the self-imposed challenge. The painstaking rebuild was complete and, apart from the decorating and furnishing, nothing but snagging remained. No more than a summer’s part-time toil, even for a man with his eye for detail and limited free time.
Not that he would be satisfied with the result, not fully, but at least the first phase of his ‘work in progress’ was over. Plenty remained for him to do. The outhouses, the garage and workshop, would need an upgrade, pretty soon. And as for the garden …
Don’t go there, Jones.

He could have hired a team of skilled builders and landscape gardeners and finished the work long ago, but that would have defeated the object. Before buying the rundown cottage in the middle of nowhere, Jones had never owned his own home. This would be his first and his last. His final resting place. It had to be perfect and, no matter their skill levels and their speed, hired builders would never be able to give it the same care and attention as Jones.
He sighed. If he played it right, there would always be something to do, something to occupy his mind. In truth, Jones didn’t really want to finish. If the refurbishment work ended, he’d have nothing to fill his head with, not after the brass hats finally tolled the dreaded retirement bell and sent him out to grass. At least he’d had a reprieve recently. Following the years of austerity and the loss of an untold number of experienced officers, a new directive had provided a voluntary five-year extension to the mandatory retirement age for senior officers. Jones had jumped at the offer. The last thing his wanted was to be put out to grass.
He stepped back. Sunlight flashed on the roof tiles, highlighting the natural slates’ ripples and distortions. The imperfections of nature held no fear. In fact, those particular blemishes were essential. Glorious. Jones revelled in them. Okay, so the windows were filthy, but he could fix that easily enough. He’d attack them with the steam cleaner the next time he was home in daylight, although his day job didn’t allow that to happen often.
His job. His work. His life.
What the hell was he going to do when it ended in four years?
Chin up, Jones. You’ll work something out.

He sighed, spun around, and set off along the path running around the cottage, enjoying the coarseness of its recently re-laid flagstones as they contacted the soles of his walking shoes. He turned the corner at the gable end, heading towards the garage at the rear of the house and paused.
There is was. The blemish. The only major flaw in the picture. The dark blue Skoda parked next to the garage at the end of his drive.
Ugly modern monstrosity.
What would it do to him this time? Blink its flashers angrily? Bleep a warning alarm because he’d parked to close to a wall or reversed to close to a bloody pebble?
Damn it.
He’d been driving for decades without the need for ‘impact collision alarms’, ‘reversing cameras’, and ‘automated parking control’. And, damn it again, what the hell was wrong with changing gears manually, for pity’s sake?
For the second time that morning, Jones sighed. His life wasn’t all that bad. He had plenty to be grateful for. He had his health and his freedom, and he wanted for nothing. So many others had it far worse than him. Some people, innocent people, lived their lives as fugitives, on the run, hiding from the authorities, fighting for their lives. Innocent people like Ryan Kaine.
Ryan Kaine. Where are you, my man?

Jones shuddered. He could think of nothing worse that living with such uncertainties. Never knowing who to trust, and never knowing where he’d be sleeping from one night to the next.
Purgatory.
“Come on, then,” he mumbled. “Where are you?”
He held his breath to listen hard and allowed his gaze to quarter his small property, searching for any anomaly.
Nothing.
Jones approached the rounded white monstrosity with some unease. What would it do this time? He pointed the key fob at the driver’s window and pressed the unlock button. The beast’s amber hazard lights flashed twice and, with an orchestrated hum of electric actuators, the locks fuzz-clicked, the horn tooted in welcome, and the wing mirrors spread out from the door columns like petals in search of the sun.
Nice. Almost balletic.
Will it breakdance next?
“That’s it. I’m off,” he mumbled to no one.
Jones approached the driver’s door, half expecting it to open automatically for him. Thankfully, it remained steadfastly closed until he hooked his fingers under the handle and pulled. The door opened quietly, solidly, allowing the waft of air containing the aroma of new leather to filter around him.
Perhaps new cars weren’t that bad after all.
He removed his jacket, opened the rear passenger door, and placed it carefully on the back seat.
A shadow darkened the brilliant white paintwork. The shadow of a man.
Jones tensed. He raised his fists and spun around. A man’s black silhouette stood directly between Jones and the blindingly low sun. He stood straight and still, arms out from his sides, hands open—empty.
“Morning, Mr Jones,” the silhouette said quietly. “What happened to the Rover?”
Jones circled to the side, keeping his distance from dark outline, heading for the gentle shade of an oak tree. The silhouette moved in time with him, its profile turning towards the sun.
Slowly, Jones’ eyes attuned to the light, the image cleared, and the man’s rugged, handsome features became clear.
“Ryan Kaine,” Jones said without emotion. He released his breath, lowered his arms, and relaxed his hands. “Wondered when you’d show up.”
“You were expecting me?”
Jones tilted his head to the side a fraction but said nothing. Kaine had made the approach. The onus was on Kaine to make the explanation, not Jones.
“Sorry to arrive unannounced,” said Ryan Kaine, “but I need your help.”
“Again?”
Kaine smiled and dipped his head in a nod. “Again.”
Jones tore his eyes away from the man who used to top the UK government’s terrorist watchlist, and searched the landscape behind him. Expecting … what? Armed men in camouflage clothing? Snipers?
Get a grip, Jones. He’s a friend.

“Can’t you call ahead like a normal visitor?” he grumbled.
“Sorry, Mr Jones. Couldn’t take the risk you’d turn me down.”
“So, you come barging into—”
“Barging? I’d hardly call it that. I barely made a sound.”
Jones punched the side of his fist against his chest. “Damn nearly gave this old man a coronary.”
“You’re not that old, sir. And there’s nothing wrong with your heart.”
“How would you know that? Has Corky been digging into my medical records again?”
Kaine shook his head. “Nope. Our hacker friend’s been busy on other, more important tasks.”
“I won’t ask. Don’t want to know.”
“And I wouldn’t tell you even if you did ask.” Kaine smiled and shot out a hand. They shook, hand to forearm. Firm friends.
“So, what do you need this time?”
Kaine pointed to the cottage. “Mind if we take this inside. I’m gasping for a cuppa.”
Jones checked his watch, 06:59. Although he usually beat his team into work, they wouldn’t raise the alarm. Not today.
“Am I going to like this?” he asked, brushing past Kaine and leading the way through the back garden to the rear entrance.
“No, David,” Kaine said with a resigned tinge to his tone. “I really don’t think you are.”
Yep. Bloody knew it.